You Made It Political
HomeElectionsTucker Carlson 2024? Many Republicans Think He'd Be A Force In A...

Tucker Carlson 2024? Many Republicans Think He’d Be A Force In A Republican Primary 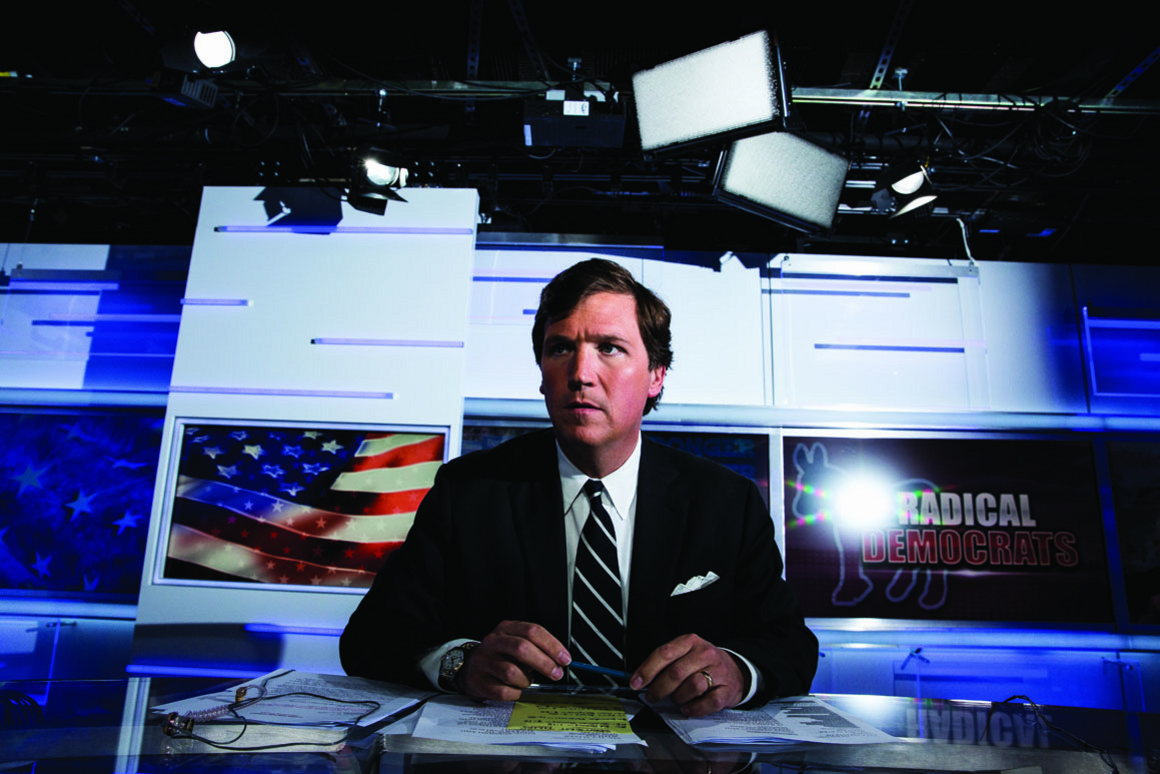 ALEX THOMPSON – POLITICO: Tucker Carlson’s audience is booming — and so is chatter that the popular Fox News host will parlay his TV perch into a run for president in 2024.

Republican strategists, conservative commentators, and former Trump campaign and administration officials are buzzing about Carlson as the next-generation leader of Donald Trump’s movement — with many believing he would be an immediate frontrunner in a Republican primary.

“He’s a talented communicator with a massive platform. I think if he runs he’d be formidable,” said Luke Thompson, a Republican strategist who worked for Jeb Bush’s super PAC in 2016.

While practically every Republican eyeing a 2024 presidential run is professing loyalty to Trump the person, Carlson has become perhaps the highest-profile proponent of “Trumpism” — a blend of anti-immigrant nationalism, economic populism and America First isolationism that he articulates unapologetically and with some snark. At the same time, he’s shown a rare willingness among Republicans to bluntly criticize Trump when he believes the president is straying from that ideology.

In another twist, Carlson has established a friendship with Donald Trump, Jr., according to a source familiar with their relationship. Trump Jr. has drawn his own share of presidential buzz.

“Tucker Carlson Tonight” is currently the most watched cable news program in history, according to the second quarter ratings released this week. And on Fox News’ YouTube channel, Carlson’s segments from the past quarter have drawn well over 60 million views and are among the most popular videos in the eight years since the network began posting on the platform.

His popularity with the base would instigate a debate over the future of the party — essentially whether Trump was an aberration or a party-realigning disrupter — a fight that will be all the fiercer if Trump loses in November.

“Let me put it this way: If Biden wins and Tucker decided to run, he’d be the nominee,” said Sam Nunberg, a former top political aide to Trump who knows Carlson. But Nunberg said he doesn’t believe Carlson will run because “he’s so disgusted with politicians.”

Sixteen prominent Republicans interviewed by POLITICO said there’s an emerging consensus in the GOP that the 51-year-old Carlson would be formidable if he were to run. Some strategists aligned with other potential candidates are convinced he will enter the race and detect the outlines of a stump speech in Carlson’s recent Fox monologues. Others, particularly those who know him well, are skeptical that he would leave his prime-time TV gig.

Carlson and Fox News declined to comment on his political prospects.

Rich Lowry, editor of the conservative National Review and author of “The Case for Nationalism,” said in an interview, “No one can dismiss this and say it’s completely implausible.”

“There is at the very least a significant faction within the Republican Party that [Carlson] has a huge stake in and arguably leadership over,” Lowry, who writes a column for POLITICO, said. “If he has political ambitions, he has an opening. He has a following and a taste for controversy. He’s smart, quick on his feet and personable. Political experience matters less than it once did.”

Carlson has never run for office and has been dismissive of doing so in the past. In 2012, Nunberg said Republican operative Roger Stone unsuccessfully pushed Carlson to run on the Libertarian ticket. Stone told POLITICO in an email that “[i]t is not inconceivable that I may have raised it in jest or in passing as repartee, but have no memory of that.”

On his show, Carlson has made it abundantly clear that he thinks Trump’s election in 2016 was not a freak accident. Instead, he views it as a righteous repudiation of a morally bankrupt Republican Party that had become obsessed with capital gains tax cuts and foreign wars. This week, he warned his viewers to watch out for “vultures [who] wait just off stage to swoop in and claim the GOP for themselves once Donald Trump is gone,” name-checking likely 2024 candidate Nikki Haley.

“The moment Trump leaves, they will attack him,” he said. “They’ll tell you that ‘Republicans lost power because they were mean and intolerant just like Donald Trump.’ … It’s a lie.”

It is just one of many exhortations from the past month that have propelled Carlson to new popularity among the GOP base. As Republicans across the country and in Congress have expressed newfound openness to reforming the police and taking down Confederate monuments in the wake of protests, Carlson has denounced the Black Lives Matter movement and derided Republicans who have gone along with it.

“This may be a lot of things, this moment we are living through. But it is definitely not about black lives, and remember that when they come for you,” Mr. Carlson said in one 25-minute monologue on June 8 that has over 5.4 million views on YouTube. That lost him high-profile advertisers including Disney, Papa John’s, and T-Mobile, whose chief executive tweeted, “Bye-bye.”

A Fox News spokesperson said that “Tucker’s warning about ‘when they come for you’ was clearly referring to Democratic leaders and politicians.”

Carlson faced a similar advertiser exodus in 2018 after saying that immigrants make “our own country poorer and dirtier and more divided.”

“The angry children you watched set fire to Wendy’s and topple statues and scream at you on television day after day are truly and utterly stupid,” he said on his show last week. And he has repeatedly pushed back on the idea that racism is systemic in the country. “Overall, this is the least racist country in the history of the world,” he said a few days earlier. “Millions of Africans want to move here. Many already have. Our last president was black. What are you talking about?”

His audience has rewarded him with blockbuster ratings.

Carlson has also earned powerful enemies in the party for his regular missives aimed at lawmakers and power brokers — attacks that he has kept up for the past month.

After Haley said the killing of George Floyd “needs to be personal and painful for everyone” in order for the country to heal, Carlson said, “What Nikki Haley does best is moral blackmail.” A Haley spokesperson declined to respond.

When Republican Sens. Ron Johnson and James Lankford this week proposed making Juneteenth a national holiday and doing away with Columbus Day in order to keep the number of national holidays the same, Tucker mocked the effort. “They describe themselves as conservatives, as improbable as that may seem,” he said.

Carlson painted with a wider brush this week, saying Republican Party leaders’ “so-called principles turned out to be bumper stickers they wrote 40 years ago.” In a sentiment that drew praise from some conservatives and liberals alike, he added that, “Instead of improving the lives of their voters, the party feeds them a steady diet of mindless, symbolic victories — partisan junk food designed to make them feel full even as they waste away.” Carlson apologized, to “the extent this show has participated in it.”

Carlson even tore into Trump’s top aide and son-in-law Jared Kushner. “No one has more contempt for Donald Trump’s voters than Jared Kushner does, and no one expresses it more frequently,” he said last month. He blamed Kushner for moderating the president on immigration, law enforcement and foreign policy.

The Kushner-bashing made some Trump-aligned Republicans wary of praising Carlson on the record. But several are bullish about a potential candidacy.

“I think everybody views Pence the same: What a great guy. But I don’t think anybody thinks he’s the force of nature that it takes to win the presidency,” said one former White House official. “I think Day One, Tucker probably starts ahead of those people if he does run.”

A Republican strategist close to the White House added: “If you are a Republican politician and you want to know where Republican voters are, all you have to do is watch Tucker Carlson every night.”