You Made It Political
HomePoliticsWHERE'S BIDEN? President Goes Into Hiding After Failed ABC Interview 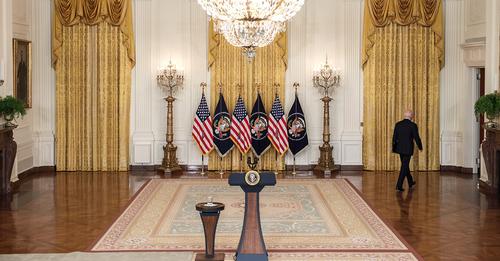 The president took all public remarks, press briefings, and press conferences off his schedule as he and his administration deal with the backlash from their botched troop withdrawal that put thousands of American lives in jeopardy and saw Kabul fall into the hands of the Taliban.

Biden’s now-clear press schedule also comes after his much-criticized ABC News interview on Wednesday night, when the president claimed there was no better way to get out of Afghanistan. Other than the ABC News interview, Biden has not taken any questions from the press this week.

Biden’s decision to bunker down amid the Afghanistan crisis evokes his strategy during the 2020 presidential race when he spent a large amount of time away from the campaign trail.

When asked if the president believes that his campaign strategy of ducking out of the public eye is translating well to his official duties and if his strategy sent a message of American strength to our allies and adversaries, a White House official pointed to Biden’s ABC News interview and press briefings by the Pentagon and State Department.